SlangLang » Memes » What, You Egg?

What does What, You Egg? mean?

What, you egg? refers to a memorable quote from William Shakespeare’s Macbeth.

Online, it became frequently quoted and referred to, as it is considered a strange insult.

It is also referenced in memes about literature teachers, who always look for symbolism in every word. 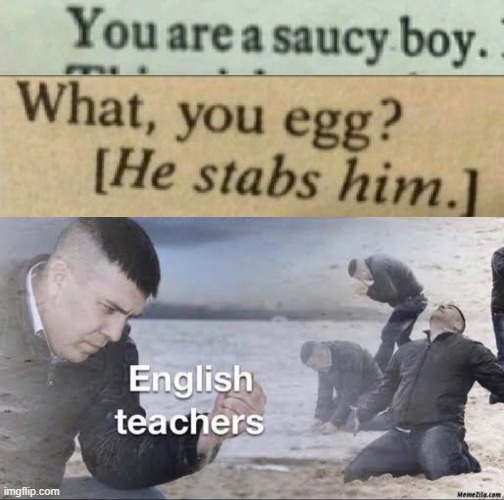 What's the origin of What, You Egg??

Macbeth, written by William Shakespeare was first performed in front of an audience in 1606.

In one of the scenes, MacDuff’s son is attacked by Machbeth’s men, one of whom proceeds to say “What, you egg?” before stabbing him.

It was posted to Tumblr by cantgeddynuffofdatass on July 13th, 2013, with the captions “This is my favorite Shakespeare quote.”

How did What, You Egg? spread?

By October 2018, the meme would appear on various image macros on several subreddits, like r/dankmemes and r/me_irl.