Trumpet boy refers to a photo taken of a boy playing his brass instrument very close to a girl’s ear.

The picture on the internet inspired a series of object labeling memes, image macros and video edits. 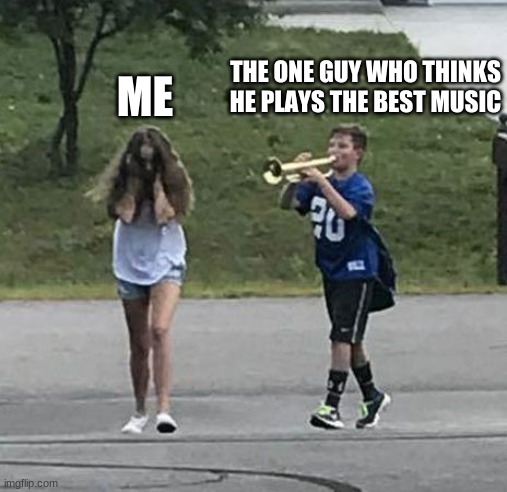 The original photo was uploaded on the site Imgur in 2018.

In the photo, we can see trumpet boy playing his trumpet, while walking towards a girl. The girl is covering her ears with her hands and looks like he tries to run from the boy following her.

As a meme, trumpet boy started out on /r/funny on Reddit the same day the original photo was uploaded on Imgur in 2018.

A few days, later user @NoMagRyan posted the picture on Twitter with the caption: “has any picture summed up Twitter as well as this one?”

Soon object label memes that featured the image started to show up on Reddit, relating to various trends of the time, like Ugandan Knuckles.

Another big trend for the trumpet boy meme in 2018 was the video-edited parodies, featuring the boy playing his instrument to music that is edited over the clip.