The sacred texts refer to a memorable quote from Star Wars: The Last Jedi, said by Luke Skywalker.

An image macro of the scene became popular among users, to expand with humorous captions, describing the destruction of nonsensical, weird or insignificant scripts. 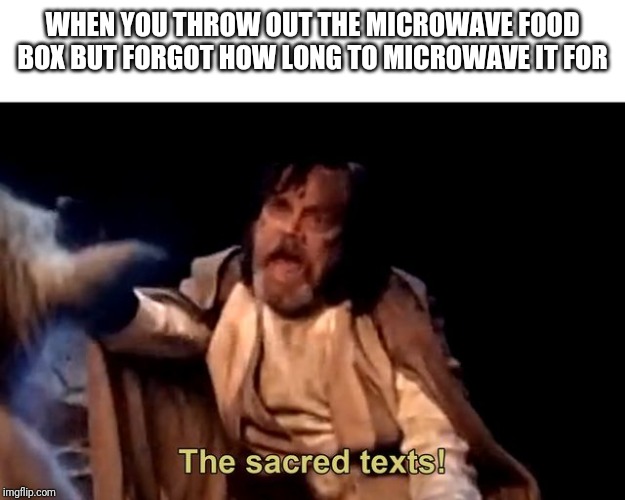 Star Wars: The Last Jedi premiered in the United States on December 9th, 2017.

In one of the scenes, Yoda appears to Luke (voiced by Frank Oz and played by Mark Hamill respectively) and proceeds to burn “the sacred texts”.

It is here, Luke exclaims the quote.

The first post to feature the image macro can be traced to 4chan’s /tv/ board, shared by an anonymous user, on December 14th, 2017.

The meme first appeared on the r/SequelMemes subreddit on December 30th, 2017.

It was here that the captions “The sacred texts!” were featured on the image macro.

By January 2018, the meme would appear on the r/dankmemes subreddit, as well as Facebook, Imgur and later 9GAG.