Succ is a street spelled version of suck, similar to thicc or fucc.

It is used when someone is talking about some good head experience… or just the quality of their newly bought vacuum cleaner. It is often seen with the Layers of Irony head, as well as Spongebob. 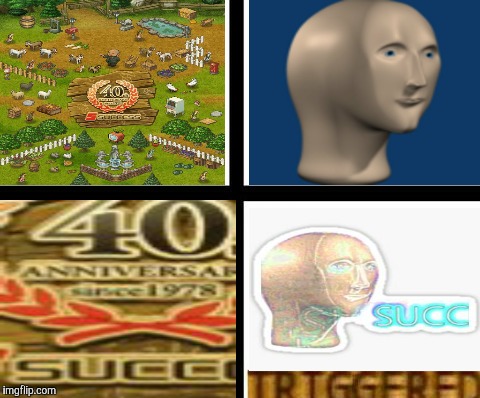 The first post that included succ was submitted to Tumblr in 2014, in a message “She succ me thru my boxers”.

Soon after a meme was born, with Feels guy staring at us with his well-known lifeless eyes with the text above “She succ me thru my feel”.

Succ has become one of the meme giants, with it being featured on most of the sites memes get to, from Reddit to Tumblr to YouTube and 4chan.

Even the legend Filthy Frank has mentioned succ in one of his videos, called E. T. 2. Succ really exploded though in 2016, when it was featured in the 4 tile comic, Layers of Irony with Meme Man saying the glorious word.

In the same year the a Facebook page was launched with photoshopped pictures of the creator of the site. Zucc’d is now a synonym for banned from Facebook amongst the memer community.