What does Philosoraptor mean?

Philosoraptor is perhaps one of the most iconic pieces of advice animal image macro series, featuring an image of a velociraptor holding its fangs close to the chin, gazing into the distance, giving it the appearance of a philosophical thinker.

The meme usually features a caption that contemplates a train of thought which is paradoxical or controversial, showing the dinosaur being occupied with deep thinking and philosophy. 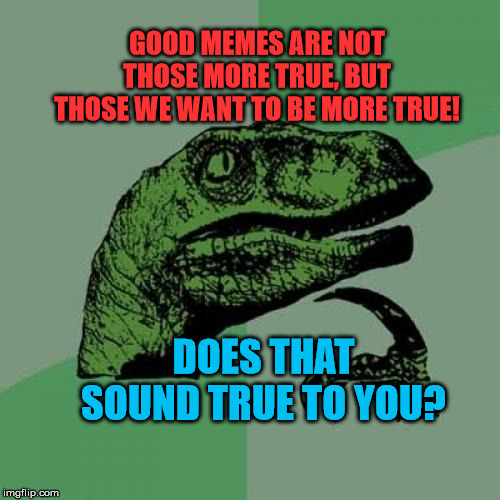 What's the origin of Philosoraptor?

The original artwork was created by Sam Smith in 2008, who created the design using various drawings of velociraptors he found online. The design was originally meant for shirts and merchandise.

The word “philosoraptor”, however, was born independently from Smith’s creation. Since “philosoraptor” and “velociraptor” sound very similar when pronounced, memes about a philosophically-conscious dinosaur were created on 4chan as early as in 2007. Yet, the term was brought in relation with the iconic artwork of Smith only in 2009.

How did Philosoraptor spread?

Philosoraptor officially became an advice dog meme variant on the site Encyclopedia Dramatica in November 2009. From that point, the meme skyrocketed in popularity, eventually reaching back to Sam Smith, who was the copyright owner of the image.

Luckily enough for meme-creators, Smith was cool enough to let go of the copyright ownership and released the artwork for creative usage.

By 2011, philosoraptor had reached “god-tier” on the site Memegenerator.

The meme eventually reached its peak in early 2012, after which it saw a slow, but steady decline in popularity in the following years.