What does Oh, You mean?

Oh, you refers to a popular slang expression, used in response to a witty statement or a clever excuse.

Online, it is a frequently used comeback on message boards and forums, while also being a popular comic format on Reddit, revolving around a Doge and a man.

The opposite of the loving “Oh, you” could be the hateful No U. 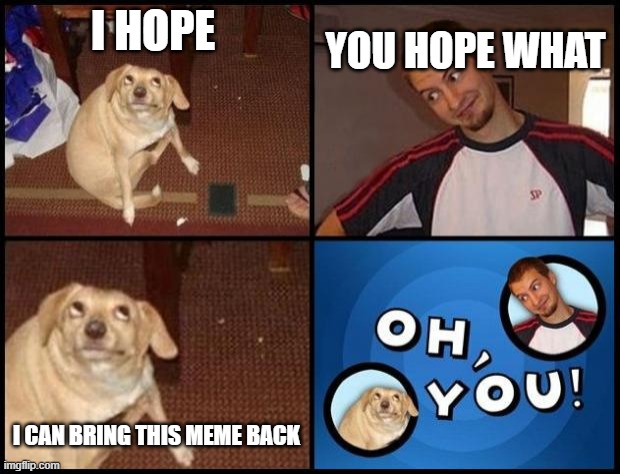 What's the origin of Oh, You?

“Oh, you” has been in use in the English language for centuries, thus its origin is not known.

An early instance where it appeared in a written form, comes from the 1920 novel, “Oh, You Tex!”.

“Oh, you” first started appearing on image macros during the 2000’s, paired with a photo of a man looking down with his hands on his hips, with a forgiving, condescending expression.

While its first use is not known, its popularity rose significantly after being featured on Newsgrounds forums in February 2006.

How did Oh, You spread?

The “Oh, you” image macro spread rapidly in the late 2000’s, making an appearance on 4chan, Facebook, Tumblr, Twitter as well as Urban Dictionary.

Its popularity, however surged in 2012, when in March, it was paired with a photo of a dog looking up shyly, shared on Reddit.

Comics then started sprawling up across the web, especially on the r/Funny subreddit, however also appearing on sites like iFunny, 9GAG, Imgur and other social media sites.