Let them fight is a quote that refers to a specific scene of the 2014 action sci-fi movie Godzilla. The scene features Professor Ishiro sharing his opinion about Godzilla and Muto, two radioactive creatures, believing that the only way to deal with them both is to get out of the way and let them fight.

Online, the screenshot taken of Watanabe captioned with his quote has become an image macro and reaction image, often applied in situations where physical aggression is involved between two or more parties. 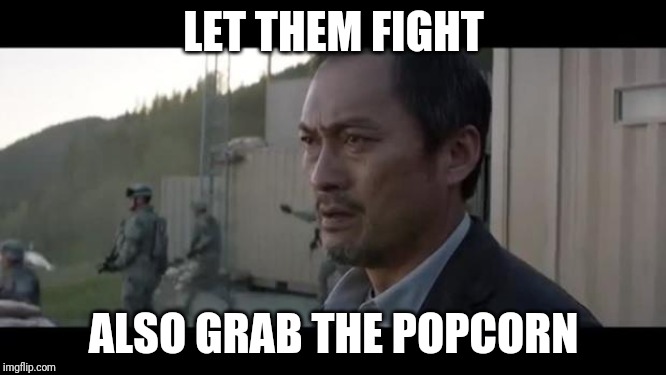 The story revolves around the origin story and then the epic clash of Godzilla and the Muto creature.

The American military is investigating the case of the nuclear creatures throughout the movie, one of the lead figures of the investigation is Professor Ishiro (portrayed by Ken Vatanabe), who is asked to give his opinion on dealing with the matter of the monster.

This is the scene where Ishiro utters the line: ‘let them fight’ as he gazes in the distance and the camera closes up on his face.

A short version clip of the scene was uploaded by the channel Deanobeany on YouTube, shortly after the movie’s release in 2014. The clip gained 380.000 views since.

As a reaction image, the meme mostly spread on Facebook, Reddit, Tumblr and other meme sharing sites such as Imgflip.