Bueno is a reaction meme based on the DC Comics superhero Bueno Excellente, who fights evil forces by his powers that he gains off of his perversion.

Bueno is an obese, sweaty Hispanic man who only ever says “Excellente!” or “Bueno”, which is often followed by him chuckling. His face illustrated in the comic books has become a template for reaction images which are used when somebody finds something arousing or to their likings. 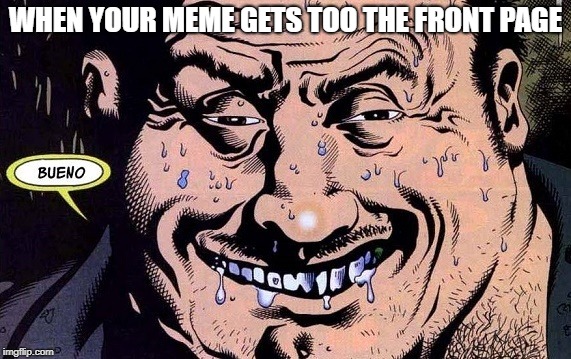 The reaction face of Bueno Excellente originates from a comic series Hitman.

In an issue of the series, the character Dr. Jackson is shown while burning and shredding documents. Bueno shows up with his head tilted backwards and his tongue sticking out, uttering his iconic catchphrase: “bueno“.

The meme initially started to spread on Twitter, and eventually surfaced on Reddit, where various other alternatives were created, mimicking the facial expression of Bueno Excellente.

The meme reached its popularity in February 2019, when it became a popular trend to add the caption ‘bueno’ to images of cats that resemble the aesthetics of the character of Bueno Excellente.