Big brain time is the time when you are in a dire situation, everything depends on you, and you have to unleash the brain with a big B.

The most renowned “big brain time” is an edited image of Youtube user Markiplier.

In the image that soon became meme material, Markiplier is pictured with a ridiculously large forehead, and the image is captioned “Yeah, This Is Big Brain Time”.

The meme is a reaction to either very difficult tasks that requires a lot of intelligence and focus, or the exact opposite – particularly foolish tasks, that doesn’t really require any intelligence at all. 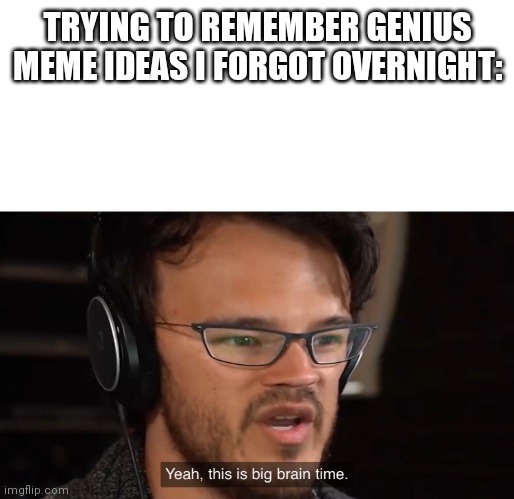 He is playing a horror video game named “Baldi’s Basics in Education and Learning”, which is a parody of the 80’s and 90’s educational video games created for children.

Note: Baldi’s Basics is not for children.

At one point Markiplier says:

The first known meme featuring the edited image of Markiplier was posted on Reddit one week later, by user Z_2000.

It had the caption “When you spell a word correctly without looking it up”, followed by the “big brain” phrase as catchphrase.

However, the “big brain time” meme didn’t gain huge popularity until one month later, when the template made its way to the r/dankmemes subreddit with close to 4 million followers.

The meme gained over 12K upvotes, and was the genesis of plentiful similar “big brain time” memes.