SlangLang » Memes » Arrow To the Knee

Arrow To the Knee

What does Arrow To the Knee mean?

Arrow to the knee refers to a popular quote, originating from The Elder Scrolls V: Skyrim.

The phrase is heard regularly in-game, uttered by guards, saying “I used to be an adventurer like you, but then I took an arrow to the knee.”

The format has been spread online as a snowclone meme, describing ceased activities like “I used to do X, but then I took an arrow to the knee”. 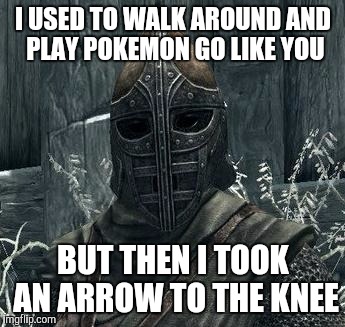 What's the origin of Arrow To the Knee?

The Elder Scrolls V: Skyrim was released on November 11th, 2011, by Bethesda studios.

The game features town guards, who sometimes say various lines of dialogue to the player, like the “arrow to the knee” line.

Due to the frequent nature of this quote in the game, players started referencing it online on forums and message boards.

How did Arrow To the Knee spread?

The first definition on the phrase was added to Urban Dictionary on December 4th, 2011, with plenty of other entries having been written since.

Content, revolving around the “arrow to the knee” theme started surging in December, 2011, massively boosting the game’s popularity.

Memes derived from the quote range from YouTube animations and parodies to image macros on Reddit and Funnyjunk to SoundCloud songs.